I Was Ready Not to Be a Lost Cause 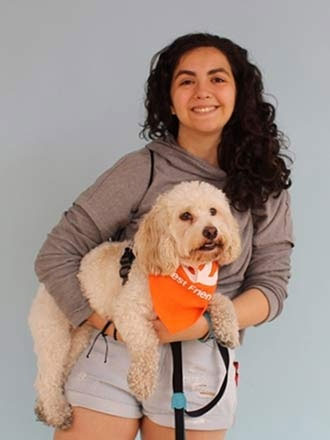 Cali Halperin was just 16 years old during the summer of 2016, when she got a headache that wouldn’t go away. A normally healthy and active high school student from New York City, she didn’t know what to do about it except take ibuprofen and hope it would get better. But it didn’t. “I woke up with it every morning and went to bed with it every night,” she recalls. “It was especially painful behind my eyes.”

Soon the headache was accompanied by an annoying ringing sound in her ear. She mentioned it to her parents, Stephanie and Michael, who told her to continue taking Advil and to let them know when it got better. But it never did, and Cali didn’t bring it up again. “I was scared that the pain was all in my head (no pun intended),” she says. “I thought that maybe if I didn’t discuss it, it would go away.”

Over the next few months Cali became increasingly distraught, uncomfortable, and tired. She stopped going to after-school activities and hanging out with friends. “It was exhausting being in pain all day and still trying to manage school,” she says. “I would come home, do my homework, and then go to sleep, because sleeping was easier than dealing with the pain and the ringing sound. I became completely isolated. I could barely get through the school day.”

Cali finally confided in her mother again, who was shocked. Stephanie had noticed how tired and withdrawn her daughter had become, but she didn’t know how much pain she was in. She took Cali to an endocrinologist, who urged them to see a neurologist.

A week later they met with the neurologist, who raised a concern about high pressure in Cali’s head. Stephanie was told that Cali needed a lumbar puncture and further testing to check for papilledema — a condition in which increased pressure in and around the brain causes part of the optic nerve inside the eye to swell. The swelling can eventually put so much pressure on the brain that it becomes life-threatening.

Panicked, Stephanie and Michael rushed Cali to the emergency room, where she underwent a barrage of tests that finally resulted in a diagnosis. Cali had pseudotumor cerebri — also known as idiopathic intercranial hypertension (IIH) — a rare condition that causes high pressure in the brain. The symptoms of IIH — headache, whooshing or ringing in the ear, and blurred vision — are similar to those of brain tumor, but there is no tumor present. Pseudotumor cerebri is idiopathic, meaning there is no known cause, but it can cause worsening headache pain and eventually lead to loss of peripheral vision — and even blindness.

“I was terrified,” says Cali. “The doctors told me that if this were left untreated I would eventually go blind, and that the only way to treat this condition was through medication or surgery. They looked at me with pity and I felt like a lost cause,” she adds.

Cali was put on a drug called Diamox in an attempt to reduce the level of fluid in her brain, but the side effects were terrible. She lost her appetite and felt foggy and even more depressed — and the pain and pulsing sound in her head continued. She slept more and more, while her worried parents kept their voices down at home and the TV off. “I couldn’t eat or focus or go anywhere because of the Diamox,” she recalls. “I had a miserable quality of life.”

Headaches caused by venous sinus stenosis (left), can be alleviated by opening up the narrowed vein with a mesh stent (right).

Meanwhile, Stephanie was determined to find better options for Cali. She began researching doctors in New York who specialized in pseudotumor cerebri and learned about research being conducted at the Weill Cornell Medicine Brain and Spine Center. She filled out a form online, and a few days later she was contacted by someone at the hospital who helped her set up an appointment for Cali with Dr. Jeffrey Greenfield, a pediatric neurological surgeon.

Meeting Dr. Greenfield restored the family’s feeling of hope — especially Cali’s. “The appointment took a completely different tone,” she says. “Dr. Greenfield talked directly to me, not just to my parents. And after he walked me through every possible treatment option, he told me that I was the perfect candidate for a clinical trial they were conducting.”

Dr. Greenfield introduced Cali to Dr. Athos Patsalides, an interventional neuroradiologist who was conducting the trial. He explained that IIH can sometimes be traced to a problem called venous sinus stenosis — or narrowing of the veins in the brain — which impairs the absorption of fluid in the brain, resulting in increased pressure in the head. Dr. Patsalides was pioneering a new minimally invasive procedure to open up the narrowed vein. After making a small incision in the groin and threading a tiny catheter into the brain, he would insert a stent, or wire mesh, into the narrowed vein to widen it, relieving the pressure and alleviating symptoms. (The results of that trial have now been published. Download the article summarizing the results.)

“Dr. Patsalides gave me complete confidence that the surgery would put an end to my pain and prevent me from going blind,” says Cali. Stephanie agrees. “Dr. Patsalides was so smart and knowledgeable,” she says. “He made us feel strong about this procedure.”

Surgery was scheduled for June 20, just after the school year ended, and Cali was ready. “I was more scared of going blind, being in eternal pain, and losing my independence than I was of the surgery,” she says. “I was ready not to be a lost cause.”

The surgery went well, and Cali turned to her father in the recovery room and said she couldn’t feel the pressure in her head anymore. The constant pain that had plagued her for eight months was gone — and so was the ringing sound.

The family was ecstatic. Cali went home a few days later to recover, feeling happy and relieved, and soon her life was back to normal. When she went to see the movie Wonder Woman with a friend a few weeks after the surgery, she enjoyed every minute of it. “I didn’t have to step out of the theater to recover from the pain — not once,” she says. “Even during the massive battle scene, I was completely pain-free. I started to tear up then because it was the first time that I had not been in pain in so long.”

Today Cali is a happy and healthy 18-year-old who is looking forward to going to college next year. She even spent time at Stony Brook University recently doing research. “I want to study biomedical engineering so that I can one day help others who feel as helpless as I did,” she says.

She thanks Dr. Patsalides for changing her life for the better. “There are doctors who will not dismiss your pain because they know that your pain is real,” she says. “Dr. Patsalides never looked at me with pity. He saw a 17-year-old who was sick, not a sick girl who was 17. He talked to me directly and put my quality of life above everything else. And he made sure I was completely comfortable with every medical decision.”