I Am So Grateful for the Silence 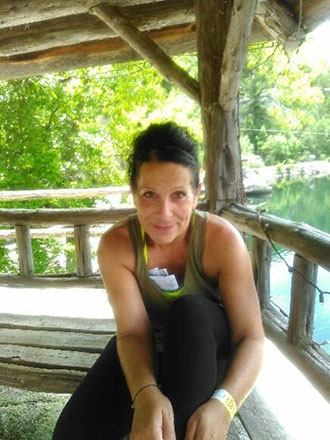 When Maryanne Pratt of Ossining, New York, first noticed the faint pulsing sound in her right ear, she figured it was a sinus problem and didn’t think much about it. But over the next few weeks the sound became more intense and she started getting headaches too. One day as she bent down to put harnesses on her dogs, the pulsing sound became so loud it was like a revving car engine.

Soon it became difficult for her to concentrate or sleep. The constant pulsing sound kept her up at night and there was no relief. “I tried different remedies: sleeping on three pillows, no pillows, running a fan for background noise, but nothing worked,” says Maryanne. “The noise was always there.”

As the months turned to years and the pulsing sound continued, Maryanne’s quality of life suffered. She took daily doses of over-the-counter pain medication, still thinking it was her sinuses, but it didn’t help. “I went from being super active to being exhausted due to lack of sleep,” she says. “I grew very depressed thinking about how I would live with this for the rest of my life.”

One weekend Maryanne went hiking with her boyfriend, and the higher she climbed the more intense the pressure became in her head. “At one point the pressure was so bad that I couldn’t hear anything,” she says. “I felt as though I had gone done deaf. Thankfully it was only for a few moments, but it really scared me.”

As soon as Maryanne got home she called her primary care doctor, who referred her to an ENT group and then to an ear specialist. The specialist ordered several MRIs and finally diagnosed Maryanne with tinnitus. Maryanne was told there was no cure and nothing she could do.

“The doctor told me to take up yoga and get a white noise machine and hopefully that would help me sleep,” she says. “I cried in the exam room. I thought to myself, how can people live a normal life like this? I honestly didn’t think she believed me. I think she thought I was crazy.”

Desperate for relief, Maryanne, who works as the Administrator for the Department of Medicine at New York Medical College in Valhalla, reached out to a doctor friend for help. That friend did a PubMed search and found an article by Dr. Athos Patsalides, an interventional neuroradiologist at the Weill Cornell Medicine Brain and Spine Center in New York City. The paper described a new minimally invasive stenting procedure Dr. Patsalides had pioneered that offered relief for certain patients with pulsatile tinnitus – a form of tinnitus that causes people to hear the telltale whooshing and rhythmic sounds in synchrony with their heartbeat.

“I thought to myself, ‘Oh my gosh, this is totally what I have!’” recalls Maryanne. “I was so happy that potentially someone might be able to help me.” Maryanne sent her medical records to Dr. Patsalides’s office and was told that she would be contacted if she fit the criteria for his procedure. (The procedure works in cases where the whooshing sound can be attributed to venous stenosis, or a narrowing of one or more of the large veins in the brain.) She met with Dr. Patsalides for the first time in November 2016.

“He was warm, compassionate, exceedingly smart but down to earth,” she says. “He has the ability to take a complex issue and explain it in a way that you can understand it. That is a sign of a great teacher.”

To be sure that Maryanne was a candidate for the stent, Dr. Patsalides first performed an exploratory procedure called a catheter venogram, in which he sedated Maryanne and then threaded a tiny soft catheter through her leg to the vein in her brain to measure it. Sure enough, Maryanne’s vein was severely narrowed, causing a disturbance in blood flow that accounted for the constant pulsing sound she heard. Surgery to insert a stent in the narrowed vein to restore normal blood flow was scheduled for the following February. “He told me that he couldn’t promise me that I would be one hundred percent better, but he could promise me eighty percent,” says Maryanne. “And for me, that was huge. Any relief would have been better than living with the heartbeat and revving sound.”

The day of the surgery finally arrived. With Maryanne under general anesthesia, Dr. Patsalides inserted another tiny catheter through an incision in her groin that carried a self-expanding stent in it. Once the stent was in position, he deployed it into the narrowed segment of Maryanne’s vein, relieving the stenosis.

When pulsatile tinnitus is caused by venous sinus stenosis (left), opening up the narrowed vein with a mesh stent (right) may be a cure.

From the moment I entered the hospital to the moment I left, I knew exactly what was going to happen because I was told everything,” she says. “The only thing I was a little nervous about was the prospect of having the worst headache of my life when I woke up, which is one of the possible side effects of the surgery. But I was also comforted in knowing that the pain would last for a few days and could be handled.”

When Maryanne woke up, she was relieved to have no headache. Best of all, the pulsing noise was gone and she was 100 percent cured. “By the grace of God, it was completely gone!” she said. “Dr. Patsalides gave me a high five right there in the recovery room.”

Soon she was back home recovering. Although she was tired from the anesthesia and sore from the two incisions in her groin, she otherwise felt fine. “I only used the pain medication for about two days,” she says.

A month after the stent procedure, Maryanne was back at work. Today she’s doing all the things she loves to do – hiking, walking her dogs, and spending time with her boyfriend. “I had come to dread those things because of the noise in my ear, the headaches, the lack of sleep and the depression I had over the whole situation,” she says. “After the surgery, my life took back off again. Sometimes I lie in bed in the silence and I listen, just to make sure that I don’t hear anything. I am so grateful for that silence.”

She’s grateful to Dr. Patsalides too. “The care I received was phenomenal from start to finish,” she says. “Not only is Dr. Patsalides an exceedingly bright physician, but he also has a way of connecting with you on a very personal level. He takes the time to consider your surgical options on a case-by-case basis. I know that he wanted the best outcome for me. Not every physician is going to think that way.”