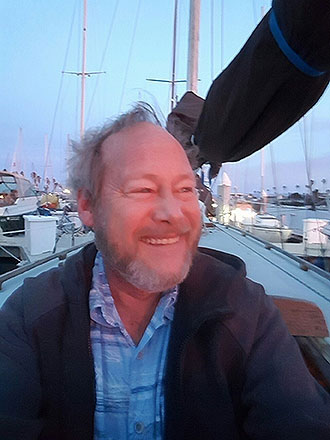 Dr. Randal Orton was in his thirties when he started to notice slight changes in his vision. It was nothing serious at first — the moon in the night sky seemed hazy, everything seemed just the tiniest bit blurry — and he attributed it to the normal effects of aging.

The day he had his first incapacitating headache, Randal didn’t connect it with the vision changes. But it was a horrible headache, like nothing he’d ever experienced before. He didn’t have another like it for a couple of years, even as his vision became slowly and steadily less crisp. When he was in his forties, however, the headaches started increasing in frequency. They usually occurred at night, even in his sleep, and it started affecting his work as he needed to take more and more frequent sick days.

A local neurologist diagnosed Randal with trigeminal neuralgia (TN) and prescribed Neurontin, but the drug had side effects that affected his daily life and work. He didn’t realize it at the time, but he was also becoming depressed as the headaches, and the constant fear of the next one, started to wear on him.

When Randal was in his fifties, he realized his vision was deteriorating faster, especially in his left eye. An eye doctor diagnosed him with idiopathic intracranial hypertension (IIH), also known as pseudotumor cerebri, an abnormal increase in pressure in the cerebrospinal fluid (CSF) that can cause headaches, changes in vision, and other symptoms. The drug therapy (increasing doses of acetazolamide) not only failed to control the headaches, but it also had difficult side effects, including skin inflammation and swelling of the wrists and ankles. Randal, a biologist, decided to take early retirement after exhausting 22 years’ worth of accrued sick leave.

Randal began to consider the possibility that he might go completely blind. He called his mother, who had lost her own vision as a child, for her advice. Doctors at the time had diagnosed her with cranial meningitis, and they removed first one eye, then the other, along with most of her optic nerves, because they thought it necessary to save her life. His mother told him she remembered exactly when it began, because she had started getting sent home sick from school so frequently. But she wasn’t sent home because of the vision changes. She was being sent home because she’d been having horrible, debilitating headaches.

“That was when I first connected her loss of sight with my own,” says Randal. Had his mom also had IIH, misdiagnosed as meningitis? The scientist in Randal took over and he began to research IIH medical literature, where he came across a report of two Japanese girls, identical twins, both with IIH. “That report fed my suspicion that IIH may be heritable,” Randal says, adding: “My interest is more than academic. I have four children!”

Randal e-mailed Dr. Patsalides for more information, and was surprised to get a reply. “As a biologist seeking details of medical research, I am used to not getting a response,” he says. “It’s probably because my questions are often naïve. But Dr. Patsalides responded to my emails, both to my academic inquiries and — later, when I realized his procedure might cure me — to my medical questions about his work.”

As it turned out, a magnetic resonance venogram (MRV) — a type of MRI scan that looks specifically at blood flow in the veins — revealed that Randal had venous sinus stenosis, a narrowing in the veins that drain blood from the brain. That made him a candidate for a clinical trial being offered by Dr. Patsalides, testing whether inserting a stent to relieve that narrowing will also relieve the symptoms of pseudotumor cerebri.

The MRV also showed that the stenosis was caused by enlarged arachnoid granulations. These valves are located on the wall of the large veins of the brain and allow the CSF to drain from the brain to the veins. When the granulations become abnormally enlarged, they can cause severe stenosis and IIH.

Before he met Randal, Dr. Patsalides and his team had treated more than 30 patients with IIH and venous stenosis, with exceptional results. Even though Randal was not the typical IIH patient (they are typically young women of childbearing age), Dr. Patsalides felt that he had a good chance of offering relief from the pressure and improvement in headaches and vision.

Randal is thrilled to report that the procedure was a complete success, and he waxes poetic about his experience with Dr. Patsalides and the Weill Cornell Brain and Spine Center team. “It was perfect, start to (successful) finish,” he says. “Somehow Dr. Patsalides manages to be a leader in his very difficult field and be extremely friendly and authentically non-condescending to patients like me, who have just enough biology background to ask really irritating medical questions. And his team is really, really good. On the Friday before my surgery we hit an insurance delay, but the team set a record of some kind and it was resolved by Monday.” 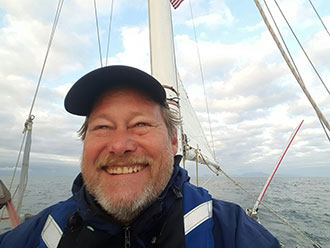 As it turns out, Randal's elevated intracranial pressure had been causing multiple kinds of headaches, with cluster headaches and trigeminal neuralgia headaches adding to the misery of his IIH headaches. He is now free of the worst of the headaches and his vision has improved. A spinal tap showed significant drop of CSF pressure. He can even see the color red again, after losing that ability to the IIH. Best of all, he says, is the difference in his mood.

“Before the surgery life was challenging, to say the least,” he says now. “Eyesight loss is scary, but it was the headaches that really made life a 24/7 challenge. It wasn’t just the headaches themselves, but the fear of them. I did not fully realize how depressed I was, and had been for years, from IIH and its effects. Just the other day the guy at the service station where I’ve bought gas for years commented, ‘Man, you seem really happy lately.’ My kids have noticed it too. Call me romantic, but I swear even the neighborhood dogs and birds have noticed it.

“I went from what was pretty much misery, waiting in fear for the next ‘ice pick’ headache, with no real hope for an authentic and permanent cure, to being retired with time to do the things I enjoyed before IIH. Most important, my children now look at me with smiles instead of with the pinched eyebrows of sympathy. It may sound corny, but that’s probably the best result of the surgery.”