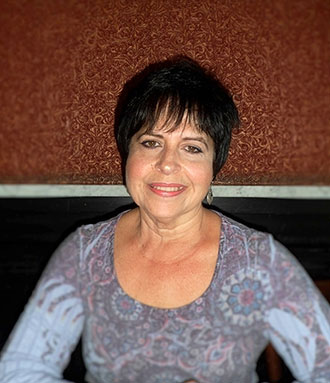 It was ten years ago when Rosanne Miller, a 64-year-old legal assistant from Brooklyn, New York, started to hear a whooshing noise in her ear. She had just returned from a trip and assumed the sound was part of the “ear-popping” sensation many travelers experience. “I attributed it to flying and thought it would go away, but it continued 24/7,” she remembers. The whooshing was a constant presence in her life for a decade — until she met Dr. Athos Patsalides and underwent the venous sinus stenting procedure he has pioneered here in the United States.

The whooshing sound Rosanne heard was a symptom of a narrowed vein in her head — venous sinus stenosis — but she didn’t know it yet. The persistent sound interfered with her daily life; she couldn’t concentrate or stay focused. Even her preferred pastimes like reading a book or relaxing in a quiet place became too loud for her. The relentless sound took a toll on her physically as well as emotionally — she remembers, “I was not able to sleep and would worry every day that it could be something much more serious.”

Rosanne explored every avenue she could to get rid of the whooshing sound. She scheduled numerous appointments with her primary doctor and her ear, nose, and throat doctor; all her test results came back negative. She was diagnosed with pulsatile tinnitus and was told there was no treatment available to her. Without any recourse to her symptoms or any known treatments, she ultimately accepted that she would have to live with the noise for the rest of her life.

Rosanne took to the internet to see if she could find some answers, and that’s how she connected with Dr. Patsalides.

Dr. Patsalides recommended a test called magnetic resonance venography (MRV). This surprised Rosanne — she “found it very disturbing that no other doctor would even consider suggesting I have an MRV.” She scheduled an in-person meeting with Dr. Patsalides immediately, where she would undergo an MRV.

An MRV, in comparison to an MRI (magnetic resonance imaging), is especially suited for pinpointing causes of pulsatile tinnitus by utilizing a dye to visualize the veins of the brain (other types of scans provide photos of organs, not blood vessels). After reviewing the scans, Dr. Patsalides was able to show Rosanne the answer that had evaded other doctors: she was suffering from a narrowing in a large vein in her brain. Even better news: Dr Patsalildes told Rosanne that she would be a candidate for his pioneering venous sinus stenting procedure.

Venous sinus stenting is a procedure that targets and widens a narrowed vein in the brain. This makes it a viable treatment for those suffering from pulsatile tinnitus and idiopathic intracranial hypertension (IIH). To widen the narrowed vein, doctors make an incision near the groin and thread a stent up to the affected vein to open it up and restore blood flow.

Dr. Patsalides gave Rosanne some time to think it over but It didn’t take long: Rosanne scheduled her procedure immediately after reading a patient story that sounded exactly like hers. 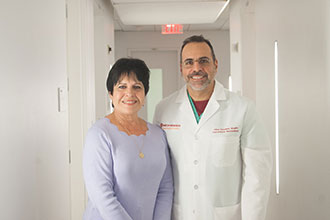 Since she had read other patient stories online, Rosanne knew exactly what to expect on the day of surgery. She was also very satisfied with the staff that was handling her case. She recalls, “Dr. Patsalides, his associates, and staff were incredible!” Rosanne still felt a little anxious — but Dr. Patsalides’ calm, comforting demeanor helped her feel at ease.

Rosanne awoke to her husband in the recovery room and flashed him a thumbs up. “The whooshing was gone! I was so grateful the procedure worked!” she remembers. Even better, the headache some people experience from the surgery was absent as well. She was a little sore at the incision site in her thigh, but it was a minor inconvenience compared to what she had dealt with over the past 10 years. She was sent home the next day.

Rosanne is living a more peaceful life since her surgery with Dr. Patsalides. She is contemplative, recalling, “My life before the surgery was filled with anxiety and sleepless nights. Now I can sleep and enjoy reading a book, listening to music, and most of all enjoying the quiet time everyone deserves.” She is thankful for her husband’s love and support for getting through it, and to Dr. Patsalides for his dedication and passion, saying, “I am a brand new person — he and his team have changed my life and I am forever grateful to them.”

She also encourages everyone experiencing pulsatile tinnitus to never lose hope. She says, “I know that there are so many people that don’t know where to turn to with this condition, but I can only hope that by telling my story more people will be helped. This would be the best happy ending to any book I ever read!”

See the questionnare Rosanne filled out before and after undergoing the venous sinus stenting procedure: 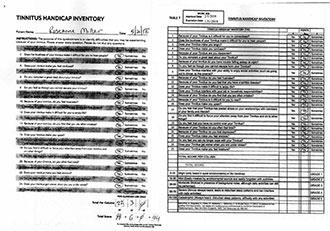