Finally, I Had a Sense of Hope 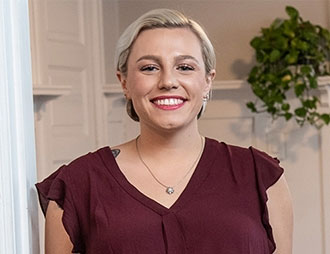 Panicked, Caroline went first to an urgent care physician, then her primary care doctor, and finally to a psychiatrist. She was diagnosed with everything from a sinus infection to mononucleosis, the flu, and anxiety. “No matter what medication they put me on, the symptoms wouldn’t go away,” she says.

Caroline began withdrawing from family and friends because of her pain. She could barely even muster the strength to visit her sick father, who had been diagnosed with cancer. Her work suffered as well – she had just started working toward her graduate degree, but she missed so many classes that she had to take incompletes. “I was unable to look at a computer screen for long,” she says, “and I was constantly going to doctor’s appointments. Working was nearly impossible.”

One day her pain became so extreme that she went to a hospital emergency room, where doctors suspected meningitis. As part of the workout they performed a spinal tap, which revealed abnormally high pressure in her cerebrospinal fluid. That’s when Caroline was diagnosed with idiopathic intracranial hypertension (IIH), a condition characterized by increased pressure in the fluid around the brain with no known cause. The symptoms of IIH – headache, vision changes, balance problems – can be similar to those of a brain tumor, which is why IIH is also known as pseudotumor cerebri. The condition is rare, occurring in only 1 to 2 per 100,000 Americans, but is 10 times more common in young women of childbearing age, particularly those who are overweight.

Caroline was referred to a neurologist and a neuro-ophthalmologist, who confirmed her diagnosis and put her on steroids and high doses of acetazolamide (brand name Diamox) to reduce the rate of fluid production in her brain. Unfortunately, her condition didn’t improve and the pressure remained high. “I ended up visiting the ER two more times after that to have spinal taps, because that was the only relief for my symptoms,” she says.

The third spinal tap didn’t go well and ended up increasing Caroline’s pain. “I finally decided that was enough and that I wanted to see a specialist,” she says.

Caroline started researching her condition online and came across Dr. Athos Patsalides at Weill Cornell Medicine. Dr. Patsalides, an interventional neuroradiologist, had pioneered a stenting technique that had been successful in certain patients with IIH. Dr. Patsalides had found that in those with venous sinus stenosis (a narrowing in the veins in the brain), widening just one of the affected veins could relieve the symptoms. “After seeing all the information about him on the website I decided that Dr. Patsalides would be the perfect doctor to help me figure out this condition,” she says.

Indeed, her initial meeting with Dr. Patsalides changed her life. He began by ordering a magnetic resonance venogram (MRV), which determined that Caroline did have stenosis in her right transverse sigmoid sinus. The narrowed veins inside Caroline’s brain were preventing cerebrospinal fluid (CSF) from draining normally, which caused an accumulation of excess fluid and increased intracranial pressure.

Dr. Patsalides described the minimally invasive stenting procedure he used to treat venous sinus stenosis and alleviate the pressure. It involved inserting a self-expanding stent into one of the affected veins to widen it, allowing the CSF to drain normally.

“He told me I’d be a good candidate for the procedure and I scheduled it that same day,” says Caroline. “I felt so lucky to have a doctor like him helping me. I felt lost in the medical system, but finally I had a sense of hope.”

When Caroline woke up from the surgery, she felt pain-free for the first time in months. Her headache and tinnitus were gone, her vision was clear, and the pressure in her head had disappeared. The stenting procedure had worked.

Today Caroline is happy and healthy and back at work. Two years after the procedure, she has lost 50 pounds and she started a support group on Facebook for people with IIH who are considering the stenting procedure. Currently there are more than 900 active members.

“Starting this support group was a great way to share my experience and help those who felt like I did prior to my surgery,” she says. “I have shared how my life has completely changed and how well I benefited from the procedure.”

Caroline says she wishes she could thank Dr. Patsalides every day. “Not only is he smart and extremely educated, he has an amazing bedside matter,” she says. “He understood what I was going through and was supportive. He’s an amazing doctor who cares about his patients. Dr. Patsalides saved my life.”