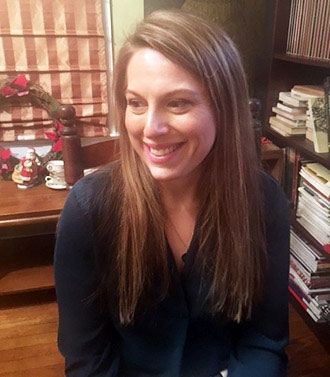 The whooshing sound in her ears was maddening, but nobody could find a solution for it. Then Kate met Dr. Patsalides, who had the answer.

Kate Metzler, a 32-year-old behavioral therapist from Kingston, New York, will never forget the frustrating year she spent seeing doctors, having medical tests, and trying get to the bottom of her mysterious and debilitating symptoms — only to finally find relief at the Weill Cornell Medicine Brain and Spine Center.

It started in November 2013, when Kate began hearing a pulsing, whooshing sound in her right ear that made it hard for her to concentrate during the day, or to sleep at night. She tried to ignore it but it never let up, and over the next few weeks it got progressively louder. She also started experiencing headaches and dizziness.

Kate’s primary care doctor referred her to an ear, throat, and nose specialist. After performing a magnetic resonance venography (MRV) to look at the blood vessels in Kate’s brain, the ENT specialist referred her to a neurologist and ophthalmologist for further testing, fearing it might be pseudotumor cerebri.

But Kate showed no signs of papilledema — an optic swelling that is a major indicator of pseudotumor cerebri — so the ophthalmologist ruled that out. “I was confused and wondered — if it’s not that, then what it is?” Kate recalls. Kate was advised to focus on losing weight – a common recommendation for patients with pseudotumor — and over the next few months Kate lost a significant amount of weight. She also saw two neurologists and a rheumatologist. But whatever she did, the pounding in her ear only worsened.

Desperate to block out the noise in her head, Kate started using sound machines at home, and listened to music through headphones whenever she could, but nothing helped. The dizzy spells got so bad that she couldn’t stand for long periods of time or walk long distances. She started missing work because she either didn’t feel well enough to go or had doctor’s appointments. Exhausted, frustrated, and starting to lose hope, she withdrew from family and friends. “There was no relief,” she says. “I began to think it was imaginary and I questioned whether it was real.”

Kate was finally referred to a neurosurgeon, who noticed stenosis, or narrowing, in a vein in her brain — and it looked severe. “He said that was most likely causing the pulsing sound in my ear and referred me to an interventional neuroradiologist to discuss treatment options,” says Kate. 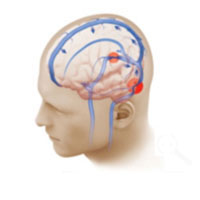 This illustration shows bilateral venous sinus narrowing (red circles). As a result of the bilateral narrowing, the flow of blood and cerebrospinal fluid from the brain is disrupted, contributing to the whooshing sounds of pulsatile tinnitus

Just hearing the words “treatment options” filled Kate with relief. “It was the first time I had heard there might be a solution,” she says. The interventional neuroradiologist confirmed that the stenosis was likely causing the pounding noise in her ear, and recommended she have a stent placed in her brain.

Kate was shocked. “I’d heard of a stent in the heart, but never in the brain” she says. “I asked if there was another interventional neuroradiologist I could speak to, to get a second opinion, and that’s when I was referred to Dr. Athos Patsalides at Weill Cornell Medicine — who was a pioneer of the procedure.”

Dr. Patsalides explained to Kate that the narrowing in the vein in her brain was causing a disturbance in blood flow, resulting in a condition called pulsatile tinnitus, which accounted for the whooshing sound in her ear. Then he described how the new, minimally invasive stenting surgery would help repair the vein and restore blood flow.

“He took his time going over my imaging and explaining the procedure step by step. He also told me about other people's success stories,” Kate recalls. “It was clear that it was very important to him that I understood what caused my pulsatile tinnitus and what we were going to do about it.”

Kate scheduled her surgery with Dr. Patsalides, and as nervous as she was, she knew she was in good hands. “I felt cared for and understood as a patient by Dr. Patsalides, and from our first meeting I had confidence in his ability to help me,” says Kate. “He exudes competence. And on the day of the surgery, when I had a small army of supporters with me, Dr. Patsalides was great about keeping them informed before, during, and after the procedure.”

Kate had to remain awake for the first part of the procedure, when Dr. Patsalides inserted a tiny catheter in her upper leg and threaded it through a vein to the affected area in her brain. “I was worried about being awake, but it was not as bad as I feared,” says Kate. “Dr. Patsalides talked me through it and helped keep me calm.”

Once the catheter was in place, Dr. Patsalides was able to confirm that the stenosis was severe enough to warrant the need for the stent. Then he put Kate to sleep while he worked at placing the self-expanding stent inside the vein through the same catheter.

Kate woke up feeling groggy and headachy, but to her relief and amazement the pulsing sound was gone. “I was completely overcome with relief,” Kate recalls. “The loud, pulsing, swooshing sound that plagued me for over a year was completely gone. I knew as soon as I opened my eyes that the stent had worked!”

During recovery, there was a scary complication: a hematoma had developed where the catheter had been inserted. “It was excruciating painful, but within minutes I had several doctors, including Dr. Patsalides, tending to me,” says Kate. “They made me as comfortable as possible, and I kept reminding myself that I'd rather have a sore thigh for a while than a pounding sound in my ear for the rest of my life!”

After a day in the ICU Kate was moved to a regular hospital room, and three days after the surgery she was able to go home. The hematoma extended her recovery a bit, since her leg was sore for a few weeks, but her tinnitus was gone. 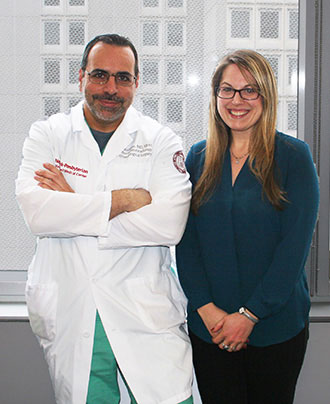 A year later, Kate says life is good. “Now I feel like I can actually think, rest, and engage in life again,” says Kate. “I can be in a quiet room and be calm. I can smile and laugh easier. I am a better friend, girlfriend, sister, daughter, aunt, and therapist. This procedure saved my life in more ways than one.” She says she has moments of anxiety, when she’s afraid the sound is coming back again, but a call to Dr. Patsalides’ office always gets her instant reassurance.

"Kate is the perfect examples of a patient with venous sinus stenosis causing severe venous pulsatile tinnitus,” says Dr. Patsalides. “Many patients, especially young women, with venous stenosis and pulsatile tinnitus suffer from idiopathic intracranial hypertension (IIH, another name for pseudotumor cerebri) and the focus is preventing vision loss. Some patients with venous sinus stenosis, however, only suffer from tinnitus. For carefully selected patients, the venous stent is a great treatment option.”

Kate hopes others with pulsatile tinnitus will learn about this procedure and find help as she did — but without as much suffering and with a faster diagnosis. “I cringe thinking that there is so little awareness,” she says. “There is a solution, and you don't need to suffer. I am forever grateful for the medical care I received from Dr. Patsalides and his staff.”