Idiopathic Intracranial Hypertension - IIH - is a condition that consists of high pressure in the head. IIH is most prevalent in the female population of ages 20 to 45 years old and the prevalence of IIH is 0.5-2.0 per 100,000 in the general population of the United States. “Idiopathic” means that a specific cause is often not identified.

The classic symptoms of IIH include headaches, vision changes and pulsatile tinnitus.

The headaches are typically worse when lying down and patients often wake from sleep with headache.

Pulsatile Tinnitus is the symptoms of hearing a rhythmic sound in the ear, in sync with the heartbeat.

Other symptoms include neck pain, nausea and brain fogginess.

Patients with possible IIH should be evaluated by expert physicians. Evaluation by an ophthalmologist is imperative as IIH can manifest with swelling of the optic nerves, a condition called “papilledema”). Neurological exam is essential also.

Brain imaging, typically MRI, is necessary to exclude conditions (such as tumors) which could have the same symptoms as IIH.

Finally, a procedure called spinal tap or lumbar puncture is often required. The spinal tap is a minimally invasive procedure during which a thin needle is inserted in the skin in the lower back and navigated into a sack of fluid. This fluid is called CSF (cerebrospinal fluid) and exists around the brain and spine. Once the needle tip is in the fluid, we can measure the intracranial pressure and also sample fluid for more tests. At the same time, we can remove some of the CSF and decrease the pressure in the head.

Today we know that the majority of patients with IIH have severe stenosis (“narrowing”) of the large veins in the brain. This condition is called Venous Sinus Stenosis . This condition can be easily demonstrated with a non-invasive test called MRV (MRI for the Veins).

If the patient is overweight, the initial recommendation will be weight loss. Achieving a healthy weight may help alleviate headache and other symptoms.

There are medications that can help reduce intracranial pressure, including diuretics (which reduce fluids in body tissue) and migraine drugs. Medicines used to treat glaucoma can also be effective, since they reduce pressure by suppressing production of cerebrospinal fluid (CSF).

A new minimally invasive procedure called Venous sinus stenting has been performed by Dr. Patsalides since 2012 has been shown to be effective in the treatment of patients with IIH. Clinical trials conducted at Weill Cornell have shown that venous sinus stent is effective in decreasing intracranial pressure and alleviating symptoms of IIG in carefully selected patients with IIH. The procedure is minimally invasive and is performed via a tiny incision in the arm or leg. For more details of the procedure please refer to the Venous Sinus Stenting section.

(Figure 3) The venous sinus narrowing has been treated with placement of a stent (circle). After stenting, the blood flow from the brain to the neck is restored (blue arrows), leading to normalized intracranial pressure and improvement of the symptoms of IIH. 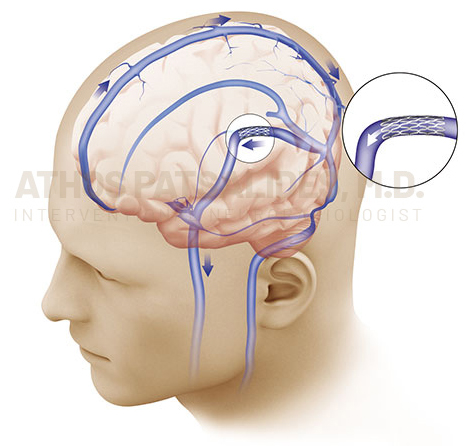